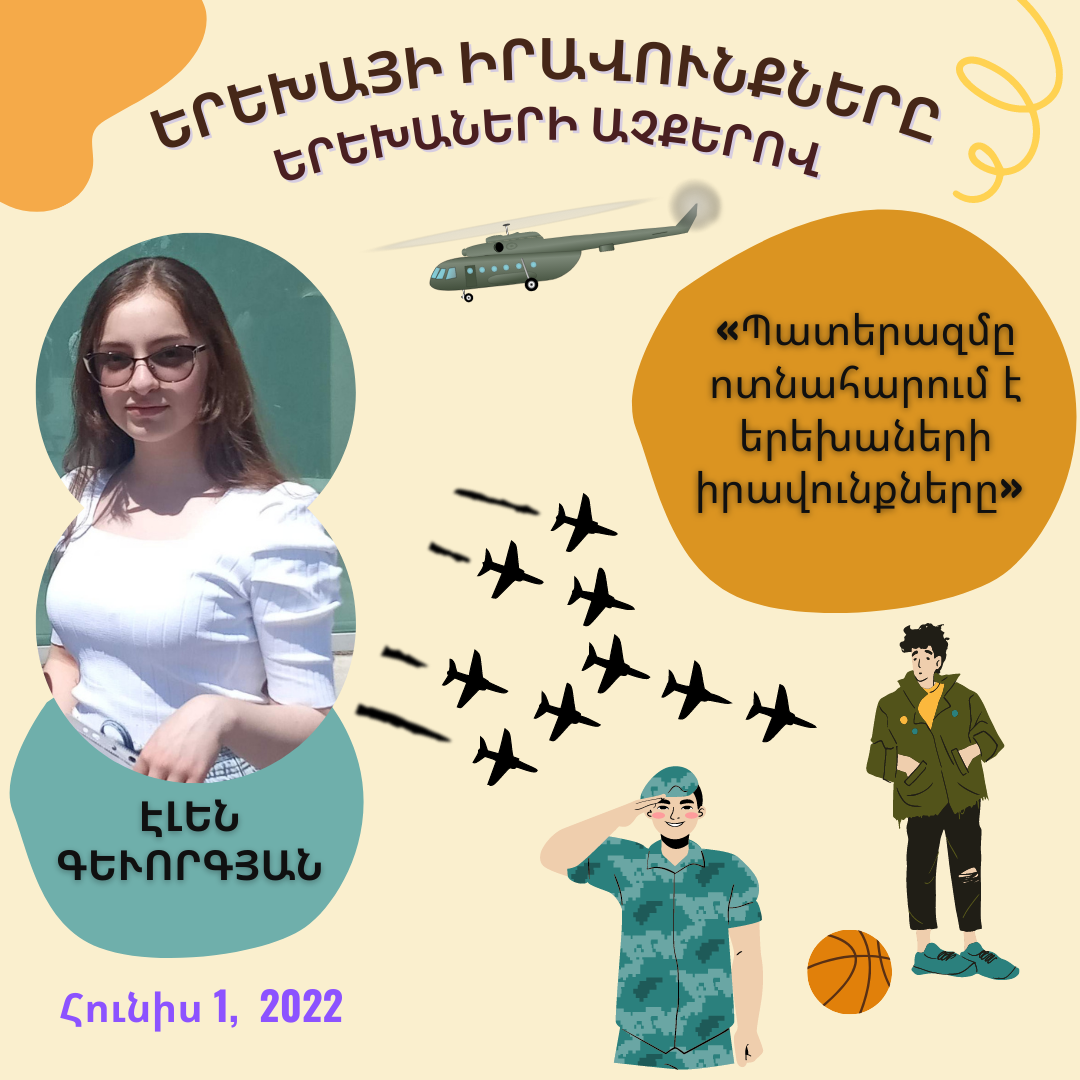 I am Elen Gevorgyan from the  Qarvachar city օֆ Shahumyan region in the Republic of Artsakh.

As a result of Azerbaijani aggression in September 2020, not only was my right and the right of my peers to education disrupted, but also were many other rights and freedoms of the population of the Republic of Artsakh as defined by the Convention for the Protection of Human Rights and Fundamental Freedoms adopted on November 4, 1950, and the OSCE Helsinki Final Act of 1973. Several territories of Artsakh are left under the control of Azerbaijan, as a result of which a return to our area of residence and original schools has become impossible. Two years after the war, many of my peers have still not overcome the post-war challenges, and many of them have problems integrating in the public school environment and executing their own rights and freedoms. The problems vary from social-economic to psychological. Many of the estimated 240 public schools that operated in the Republic of Artsakh prior to September 2020 have never reopened, and part of my 21,000 peers were forced to execute their right to education far from their native home, learning in the educational and public school institutions of Armenia and the Armenian communities of the diaspora. Nearly half of the relocated children changed schools at least once as a result of changing their accommodation while residing in the Armenian Republic. The frequent change of the area of residence has led children to the development of uncertainty and the hindrance of effective inclusion in the educational system. The relocated children have had challenges being involved in the school atmosphere. This is due to the attitude of the teachers, local children and their parents. The host community and school have not taken effective and systematic measures with the local teachers, students and parents, nor with the displaced children and parents aimed at the adaptation of the children.

What has taken place with me and my peer friends of the Republic of Artsakh showcases that the regulatory mechanisms of the state, as a sovereign entity of international law and order, in the case of the impossibility or disruption of maintenance of the rights and freedoms guaranteed by international law and order, are not complete, or, at least, they do not fully ensure the vital rights and freedoms of the peaceful population that is in an area of armed aggression.

The formation of such platforms is very important, which will provide an opportunity to the relocated children, including my peers, to present on their own, listen, and report the shortcomings of the international law and order, giving the chance and also creating new mechanisms for the elimination of those shortcomings, the prevention of wars, the implementation of the established rights and freedoms and many other aspects, and this will later bestow us the opportunity to ensure for the generations new guidelines of safe and secure coexistence based on the unification around universal values.