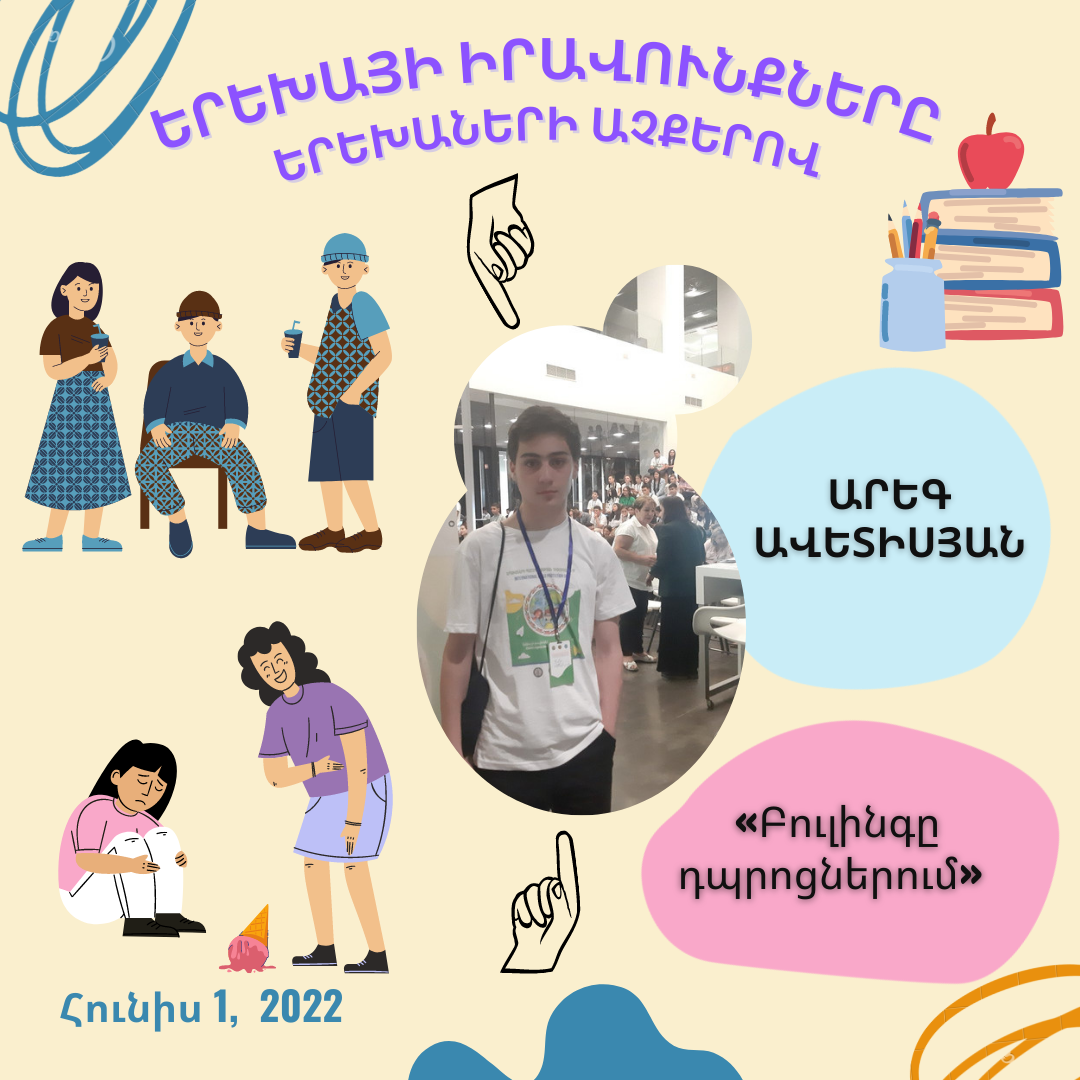 Mockery and humiliation have become an inseparable part of school life for a while now, and as the years pass this concept continues to spread more and more. This phenomenon is not new in Armenian reality; nevertheless, the term that defines the phenomenon is new. In the West, they call this phenomenon bullying. Bullying is the targeting of an individual and the periodic aggressive, oppressive and degrading actions against them.

Bullying is done for power, coercion, insults, mockery or threats, abuse, aggressive domination or to frighten. The one who bullies artificially emphasizes their presumed advantages and presumed rights over the one who is bullied, forcing a favorable behavior for themselves. Those who bully are the individuals who like to offend and humiliate classmates and are prone to conflicts and fights.

The sides to defining bullying are:

The inequality of powers; those who terrorize use their…

Many parents believe that this is not a serious problem as, for example, smoking or using alcohol; however, the results of bullying can be very grievous and irretrievable, too. Bullying negatively touches not only those who are bullied, but also those who bully. Bullied children are mainly those who:

Do not have parents

Are temporarily or permanently deprived from a family environment

Are subject to physical and psychological violence in their families

Are not surrounded with care and attention

Are subject to exploitation

Have a low self esteem and are aggressive

Are separated from the rest due to appearance, size, physiological differences

Are more weak from a physical and emotional standpoint

Are not confident and audacious

Have a dependency on others’ opinions

Are shy and modest

There are a few forms of the action of bullying

Cyber bullying, which is done through computer and the internet, using them as a means to harm,

Physical bullying by pushing, hitting, beating, pinching and other means

Verbal bullying by labeling and mockery

Social or psychological bullying, during which they try to isolate the child from their circle and exclude them from society in a premeditated way. Here, we can also include neglecting,  ignoring, not paying attention, etc…

Bullying by gestures, which takes place with the mimics of the face and the gestures of different body parts.

The motivating causes are:

The wish to dominate

Problems in the family

The effects of bullying are various:

Revenge on the bully

Bullying fluctuates from individual terrorism to group terrorism, which is called mobbing, where the fighter can have one or several “lieutenants” who are ready to assist the main fighter in their terrorizing operations. Abuse in schools and workplaces is also called “abuse of peers.” Robert V. Fuller interpreted terrorism in the context of rankism. Swedish-Norwegian researcher Dan Olweus says that terrorism takes place  when a person “constantly and throughout time is subject to negative operations”, and negative operations take place “when a person does that intentionally.” Terrorism is the creation of internal fears within a person, in this case minors, and those fears act as companions in their life and form them as incomplete members of society.

What is noteworthy is that until today Armenian legislation does not present the definition of bullying. However, that does not mean that the one who bullies should not face responsibility for their actions. The Republic of Armenia has ratified the European Convention on Human Rights, and in accordance to to the 3-rd article “No one shall be subjected to torture or to inhuman or degrading treatment or punishment.” The aforementioned section has become one of the principles of the constitution and the criminal legislation of the Republic of Armenia; correspondingly, the criminal code of the Republic of Armenia intends responsibility for intentionally causing great physical pain or great psychological suffering (Republic of Armenia, Criminal Code Article 119). This article was previously titled as torture.

Therefore, concluding the above mentioned, we sum up that:  bullying is the torture of a minor by their peers or those who have an age advantage.

What is bad is that responsibility is intended only for individuals who have reached the age of 16, and it is here where we face a problem:  So what, those whose behavior can obliterate lives and destinies are left without punishment because they have not reached the age of 16?